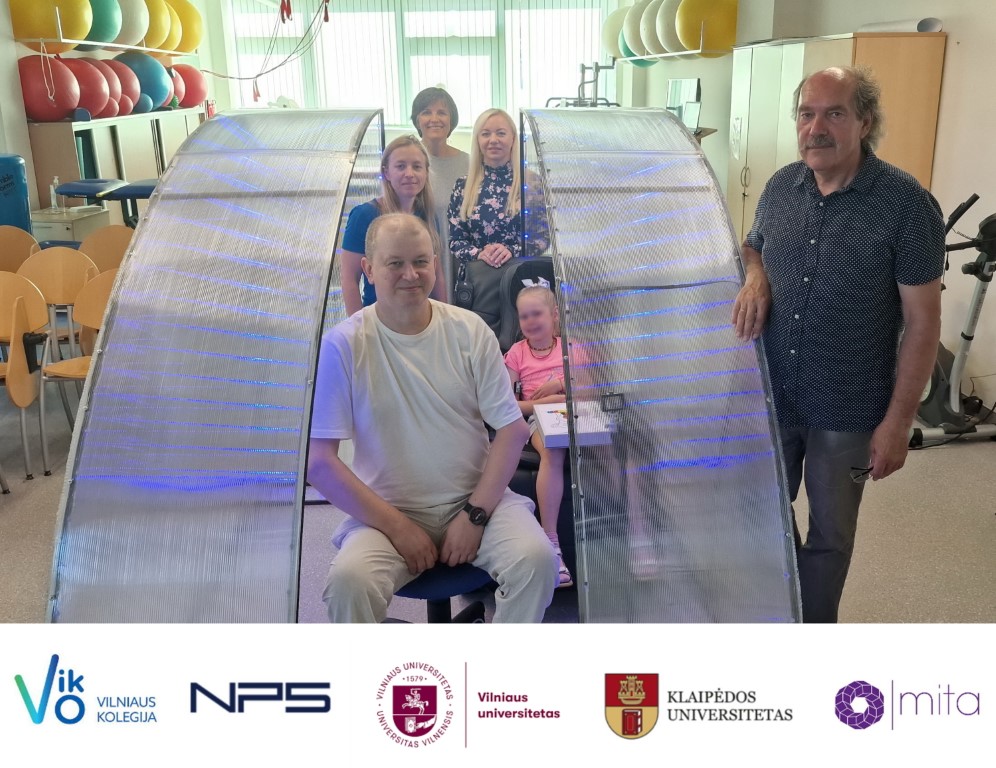 According to the scientist of the Faculty of Electronics and Informatics of Vilnius University of Applied Sciences Dr. Eugenijus Macerauskas, the need to create such a system was determined by reality:

“The idea itself developed from personal experience and communication with parents raising autistic children. Autistic children are very talented and achieve great results in studies and creativity, but emotional instability often prevents them from concentrating. It happens that a child experiences a negative emotion during a lesson for unknown reasons and remains incapacitated for hours until he calms down. This is how the idea to create a system that would help children calm down was born. It is nice that UAB “NP5” has assembled a team of scientists from different Lithuanian higher education institutions. Support was provided by the Agency MITA for Science, Innovation and Technology and the company “NP5”. This project is a high-tech science project that combines science and business to address urgent needs of the  society members.

The technologies of the future are becoming a reality

According to dr. E.Macerauskas, the relaxation system’s operation is based on the synthesis of three sensory components: “During relaxation, the child lies down in a special vibrating chair and listens to a specially created sound phonogramme of musical sounds, such as forest rustling, dolphins, music of Tibetan monks, or other selected musical relaxation sounds. Synchronized with the sounds of music, the relaxation “Chair” acts on the child with a relaxing vibration accordint to a specially designed micro-massage scenario. In this way hearing is activated, and a soft move is felt. Colour lighting is selected to match the mood created by the sounds of the music. While observing the child’s emotional expression on the face, music is selected, the vibration increases or decreases as well as the intensity of the lighting – all this harmony is created by artificial intelligence. The child’s face is monitored by a video camera built into the system. An artificial intelligence program that has no analogues in the world and recognizes emotions, determines how the child reacts to the relaxing effect and selects an individual relaxation scenario for each child. UAB “NP5” and the team of scientists managed to create a computer empathy programme that has no analogues in the world, which in the future can be applied not only in relaxation systems, but also in creating computers capable of performing the functions of an automatic psychologist.

Tests confirmed the success of the relaxation scenarios

The first tests of the relaxation system were carried out, observing how the relaxation scenario affects children. 30 children of different ages and different types of disorders with their parents participated in the testing. Following the reactions and feedback of the parents and children whoparticipated in the test, it can be said that the system really works and helps the child to calm down. No negative reactions were recorded, more than 80% were absolutely positive and only a small number were neutral.

According to E. Macerauskas, they were impressed by a young couple who brought a 4-year-old girl Vakarė in their arms. The child had cerebral palsy and also many other ailments that caused pain to the baby and were a test for the parents. After 15 min. the girl fell asleep in the chair and it was a victory because she doesn’t usually fall asleep like that. Along with the food, which is often delivered directly into the stomach, the child is given sleeping pills through a tube. The parents have to be on duty one after the other during the hours when the girl is awake.

According to the researchers, the results of the testing allow the use of this relaxation system, along with the development of other systems that will replace or reduce the need for medication. This system developed by “NP5” UAB and a team of scientists is the first, but not the last.

We use cookies on our website to give you the most relevant experience by remembering your preferences and repeat visits.
See our Privacy PolicyAccept All
Manage consent

This website uses cookies to improve your experience while you navigate through the website. Out of these, the cookies that are categorized as necessary are stored on your browser as they are essential for the working of basic functionalities of the website. We also use third-party cookies that help us analyze and understand how you use this website. These cookies will be stored in your browser only with your consent. You also have the option to opt-out of these cookies. But opting out of some of these cookies may affect your browsing experience.
Necessary Always Enabled
Necessary cookies are absolutely essential for the website to function properly. These cookies ensure basic functionalities and security features of the website, anonymously.
Functional
Functional cookies help to perform certain functionalities like sharing the content of the website on social media platforms, collect feedbacks, and other third-party features.
Performance
Performance cookies are used to understand and analyze the key performance indexes of the website which helps in delivering a better user experience for the visitors.
Analytics
Analytical cookies are used to understand how visitors interact with the website. These cookies help provide information on metrics the number of visitors, bounce rate, traffic source, etc.
Advertisement
Advertisement cookies are used to provide visitors with relevant ads and marketing campaigns. These cookies track visitors across websites and collect information to provide customized ads.
Others
Other uncategorized cookies are those that are being analyzed and have not been classified into a category as yet.
SAVE & ACCEPT